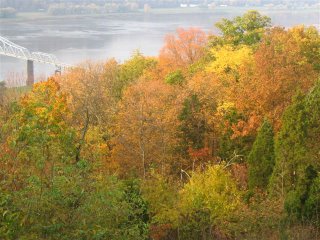 I love autumn :). Isn't it wonderful that God made our world full of color? The leaves are starting to turn here (though this picture originates farther north) and are absolutely gorgeous.

A few years back someone in my family was looking out the car window admiring the autumn colors, exclaiming "pretty trees" over and over. Someone else in my family mistakenly heard "thirty-twos" instead and was rather confused by the exclamations. The term has stuck, although I can't remember exactly who the involved parties were.

The above picture of thirty-twos was taken from the back porch of my aunt's house. Imagine having a view like that. Any guesses as to where the picture was taken? The water in the background is part of a well-known body of water in the U.S. and the bridge (and surrounding town) recently were featured in a little-known film (named after the town) that starred two actors who have each separately played a major role in a blockbuster movie. The town is small and little-known except for the film and the sport around which the film centered. Two of my aunts live with their families there, and my mom's parents live in the neighboring town where they grew up.
Posted by Susan at 8:16 PM

That picture is so beautiful and serene-- it doesn't look real! But where is it? I give up.

Well, the picture is real. It isn't even doctored with an image editor. The view is gorgeous. Both my aunt and my grandparents own homes overlooking the Ohio River, which is the water in the background.

The picure I posted overlooks the little town of Madison, featured in the recent film Madison starring Jim Caviezel (The Passion of Christ) and the little kid (name?) who played Anakin in Star Wars: Episode I. I actually was not fond of any of the three aformentioned movies, but it makes for fun trivia. I enjoyed Madison just because I was familiar with the setting, but other than that the movie was not worth a second watch.