A rather unique bread recipe. . .

So. . . as I mentioned before, I'm on this weird agonizing 4-week+ diet to try to figure out where I got a skin rash. So my naturopath doctor put me on both a non-mucus forming diet AND a candida-controlling diet, just to cover all bases and insure that I will have absolutely none of my favorite foods to eat for the next month. :-P Anyway, I've been craving anything close to bread, and specifically wanted to try a pumpkin recipe, so I tweaked another recipe, and here's what I got.

Original recipe was the following banana bread recipe (bananas are a no-no on this diet):

Then I did some tweaking and tried this instead:

Overall, not bad considering the restrictions I had on ingredients. Not spectacular either, but wow, did it taste good considering I was craving bread! I'll take what I can get :-). It was sort of dense, but not brick-like. It was moist enough, at least in its almost-fresh-from-the-oven state, but it definitely wasn't extremely sweet. But um, when the sweetener is $4/cup, I'm not exactly going to be using it in abundance :-P. Overall, not bad if you ever find yourself in the same situation. I even was able to resist all the voices in my head telling me to slather butter all over the bread I was eating. It was hard, but I did it :-).

I just tried a new tomato soup recipe that is very yummy and easy. You can see it here.

Unfortunately, I can't make it for myself for the next 4 weeks :-(. *sigh* I've had a rash on my elbows and knees (and a bit on my shoulders/back) for 5 months or so, and I finally was able to see someone about it. Basically, the suggestion is that I do an elimination diet for 4 weeks, eliminating basically every food I enjoy (all the common allergens - dairy, CHOCOLATE *whimper*, sugar - all types except pure maple syrup, peanuts, corn and corn derivatives, eggs, oranges, etc. - just pick one of my favorite foods, and it's probably on the list). Let's just say it's going to be a long 4 weeks. I predict I (accidentally) lose at least 5 pounds.

I just got back from Trader Joe's where I bought some goat's milk, goat cheese, almond butter, and a few other products. I even have to find alternative vitamins, because mine all contain corn startch.

After 4 weeks I slowly add back in foods by category, in the hopes that some light will be shed. We'll see. The challenge is to still get enough calories (still exclusively breastfeeding) and fats in. No butter! I live on butter. Olive oil, here I come. . .
Posted by Susan at 11:22 AM 11 comments:

A friend from church, who is a certified nurse midwife, sent this link on to her friends. It's a very comprehensive, nation-wide birth survey that's being compiled. I'd already completed it shortly after Hans was born, but I thought I'd pass it on to any of my readers that would like to fill it out. Eventually, it should provide a great database to learn about birth practices both general and specific to providers. You don't have to have had a natural birth or anything of the sort to fill it out; they want all kinds of births included. You just have to have given birth in the last 3 years. It does take a while to complete (20-30 minutes). I'd encourage you to check it out.

I was reading back through it after I got the link, and it really made me SO grateful again for the great prenatal, labor and delivery, and postnatal care I received! Seriously, I <3 my midwives! They have all the knowledge and skill a birth might require, but didn't feel like they had to use it on every birth ;-).
Posted by Susan at 10:07 PM 9 comments:


Me: Do you think we should be concerned that Hans is having a conversation with a shoelace?

Adrian: Nah. It's just his current version of a teddy bear.
Posted by Susan at 11:57 AM 1 comment:

I really abhore Ajax and Comet :-P. All that nasty blue-ish residue they leave is icky. I've read a lot of people on the blogosphere who suggested baking soda as a scouring alternative. I tried it and was completely underwhelmed; it just didn't have much scouring power. Then a few months ago I came across this easy recipe on Tammy's Recipes site, and I love it! It works so well, is easy and cheap to make, and doesn't leave that icky blue-ish residue. All you have to do is mix equal parts salt, baking soda, and borax (found in laundry aisle of many grocery stores) in a lidded container for storage. Then just use it as you would a regular scouring powder!
Posted by Susan at 10:20 AM 3 comments:

What Math Nerds do on Valentine's Day

I always knew Adrian was that right guy for me :-). He was in thought yesterday pondering various ways to prove that [sin(theta)]^2 + [cos(theta)]^2 = 1, and he commented that it would be an extremely straight-forward proof if preceded by a proof of the Pythagorean theorem. I agreed, and then got all excited because I remembered one of the many proofs of the Pythagorean theorem that I learned in college, so I sit down and show him. Then he gives me a refresher of how to integrate with trig substitutions. Which was fun, because my calculus is SO rusty. See, calculus is his favorite kind of math, and geometry is mine, so we get to complement each other. Haha.

Then we ate a dark chocolate orange. Because that's always a good idea.
Posted by Susan at 4:09 PM 12 comments:

What is a wok good for?

I just obtained a box of random kitchen items via Freecycle. Mainly I got it for the pizza stone - yay, I now have 2! But there are some other interesting items to try (as well as some that will be re-Freecycled or thrifted). Among them, a wok. I've never used a wok, but I've heard they're nice for stir-fry and such. Please share the virtues of a wok and suggestions on how to use it :-).
Posted by Susan at 8:37 PM 10 comments:

Seriously, I can't believe it's free. It's such a great, easy to use photo editing program. And it's incredibly easy to e-mail or blog pictures. I started a separate blog just for posting pictures. Certain relatives like seeing Hans photos ad nauseum, and I didn't want to post zillions of pictures on this blog to clog it up.

So if you like seeing 40 pictures of Hans chewing on a block, or 347 of him smiling at me sitting up, then first, you need help, second, therapy is available at www.susanegk.blogspot.com.
Posted by Susan at 8:36 PM 5 comments:

Hans is only increasing his hatred of food. He cries when I put it in his mouth. Then he shudders. Then he spits it out. But water is another story. The kid has an obsession with drinking from a cup! For a few months now he's watched me like a hawk every time I drink out of a cup. About a month and a half ago I went ahead and let him try to take a drink of my water but the poor guy didn't have clue what to do. No effort to ingest water; water spilled all over.

Then a week ago he was particularly interested in watching me drink, so I tried again, and now he totally understands how to drink and swallow. So cute. He gets super-excited when I let him have a drink. Just water for now. I hate juice :-P. I guess I'll have to break down eventually.

Tonight at dinner, the water in my glass was particularly cold, and I think it kind of gave Hans a shock, but then he kept wanting more. Then he'd be shocked and shudder from the cold, and then want more. Hilarious; Adrian and I were laughing so hard. Hans was pulling on my arm for more water; since he couldn't reach the cup, the arm that held it was the next best thing, I guess :-). Hehe. Such a funny guy. He keeps us entertained.
Posted by Susan at 10:14 PM 10 comments:

My mom downloaded Picasa for me and showed me how to use it to make basic photo edits. One definite advantage is that it's much easier to post pictures to Blogger now! Also, here are two recent YouTube videos of Hans. 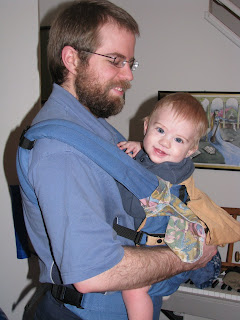 When Hans gets fussy, we walk him in the Ergo. He was pathetic only a few minutes before this picture! Daddy + Ergo = happy Hans.

Look what Hans made! 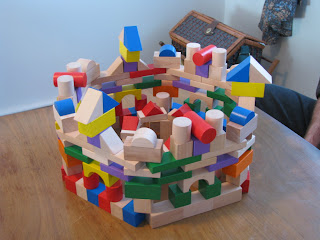 Or his daddy made it. Whatever.
Posted by Susan at 8:43 AM No comments:

Can you see his two teeth coming in on the bottom? 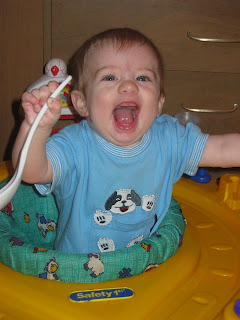 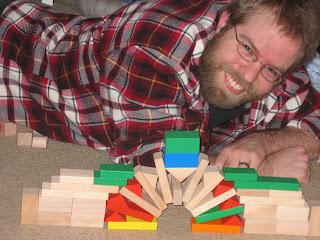 And Grammy thought she bought the blocks for Hans. . . 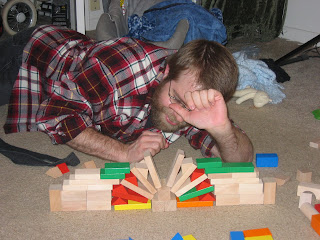 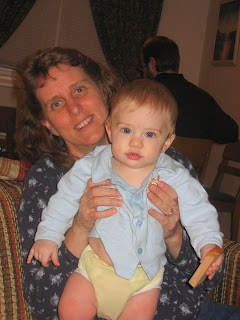 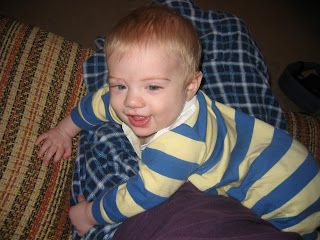 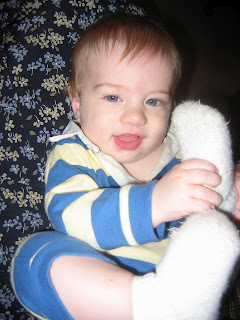