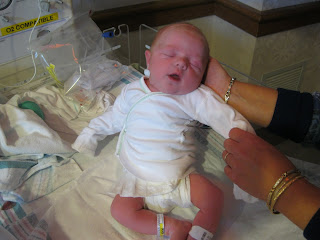 I should be sleeping because it's before 6:00 a.m. and my baby is passed out in the crib next to me, but the biological need for food is competing with my biological need for sleep, and the lure of the food service in the hospital opening in 10 minutes is definitely deciding the winner ;-). Hungry! Feeding another human being takes a lot of calories.

I woke up Thursday morning (October 7th) at 2:00 a.m. from dreams of having contractions to find that I was. . . having contractions ;-). I was 4 days "past due". The contractions were really mild, though, so I didn't get super-excited, but instead emptied my bladder to see if they would keep up. Yep, and pretty steadily 8 or 9 minutes apart.

I tried to go back to sleep, but yeah right. I gave up around 3:30 a.m. and headed downstairs to putter around, to see if movement would increase or decrease the intensity/duration/happening. Adrian came downstairs around 4:00 a.m. to see if I was in labor, to which I shrugged and said "I think maybe." He started timing them for me (he said there was no way he was going to be able to go back to sleep!), and they were now closer to 5 minutes apart, but very mild and only 20-30 seconds long, so I had no intention of rushing to the hospital right then. My labor with Hans didn't have a clearly established contraction pattern, but I was also worried this time about getting to the hospital in time, as Hans' labor was fast once it picked up, and with this pregnancy I was Group B strep positive, so I was supposed to get 2 doses of antibiotics by i.v. in me before giving birth. . . 4 hours apart, so I needed a 4 hour lead gap from when I got my first dose to when I delivered. But I also didn't want to get to the hospital prematurely :-P.
Finally around 6:00 a.m., with the contractions still around 5 minutes apart most times, they were starting to get slightly more intense, and I was having to pause during some of them, so we called our friends up the street, to heads-up them that we'd be dropping off Hans soon. We dropped him off around 7:00 and headed 1/2 hour north to our hospital, checking in a little before 8:00 a.m.

The contractions slowed down some on the drive, to about 7 or 8 minutes apart on the drive. . . ugh. Then first thing they wanted before I could labor freely was a 20 minute fetal monitor strip, which I was fine with, but after closer to 45 minutes (Gretchen wasn't performing for them with enough heart rate accelerations at first, until I downed some cranberry juice. . . bleh), I'd only had about 3 contractions, 5 total since getting out of the car at the hospital an hour+ before. Hmm. The midwife checked me at 9:00 a.m., when I got off the monitor, and I was between a 3 and 4 (90% effaced) and the few contractions I was now having were very mild. Dilemmas, dilemmas. I did not want to be stuck here forever with a putsy labor!

We opted to walk around the hospital campus to see if we could get my labor moving, and this definitely did the job. We came back to the room about an hour later when the contractions starting spiking in intensity and getting closer. . . but still no established pattern. Although I was hesitant to declare "yes, this is it," I did opt to order the antibiotics at that point, because I knew we were up against the 4-hour window, and I knew I went fast with Hans once contractions got established. It was 10:00 a.m. when I ordered the antibiotics, but it took a while for them to actually get there -around 11:00 when I actually got them in me. By this time the contractions were definitely more intense, but still doable. I wasn't quite ready for the tub, as I didn't want my labor to slow down, and I'd made it to 8 cm without needing it with Hans.

The next hour was rather a blur. The contractions escalated to very intense so quickly, and much quicker than I expected I started getting that light-headed "I'm going to faint" feel that I got just before transition with Hans, that was only relieved by the tub. Before I even had time to act on the desire for a tub I was now having a hard time talking even between contractions. Then I had a super-intense contraction, and gasped "I'm having a premature urge to push! Get Mary (the midwife). And I want the tub." So they started filling up the tub and Mary came in to check me, but it was a few more contractions (slightly milder, no urge to push) before she could check me, just because moving anywhere was slow work and a lot of effort with the very intense contractions. My water broke as I finally got on the bed to be checked, and I got another urge to push, which I fought. Mary said she couldn't feel any cervix, so I could push whenever I felt like it. I was a complete 10! I really wanted to make it to the tub, though!

Thankfully, the tub was right across the hall, but I still needed a wheelchair just to get there. Thankfully the contractions did slow at this point a tad, allowing me to get in the tub just fine. The warm water felt SO good. My only complaint with this tub versus the one I birthed Hans in was that the water was much more shallow (very different style tub!), but I also did like the seat in this one, which was good for positioning options.

I was totally in my own zone at this point, just focusing, and not terribly aware of who was around me most of the time. I was pretty out of it ;-). Just like with Hans, I really didn't have any desire to pop this baby out super-fast, so I went with urges to push, but didn't bear down super-hard, wanting to ease her out to minimize tearing. I've never understood when women say that pushing is almost a relief from the contractions, because they get to channel their anger/momentum into pushing. I just don't find pushing fun AT ALL. Gretchen was born at 12:29 p.m., screaming and hollering and NOT liking this whole outside-world thing ;-). She was 7 lb. 1 oz. with a very rounded head from such a quick delivery, golden fuzz for hair just like her brother. . . and in most other ways looking like a miniature Hans!
We snuggled in the tub wrapped in lots of towels until the cord stopped pulsing and was clamped, then we moved to the bed for placenta delivery and to repair a small tear. Then she latched right on and nursed like a champ (has barely stopped since!). SO much easier to establish breastfeeding with her than with Hans! She's such a good and determined little nurser that she had already brought my milk in by 30 hours postpartum, and at 36 hours after birth, she's already back 3 oz. above her birth weight(!).

With only 1 1/2 hours between the antibiotics (and only one dose, at that!) to delivery, we are held 48 hours at the hospital (just for precaution), rather then my original hope of an early discharge at 24 hours. But thankfully Gretchen's vitals have been great and her blood labs came back clear, with no signs of GBS complications, for which we are very thankful!

Adrian and I laughed after delivery that we didn't even have time to think about getting out all the birth music we'd brought. Ah well. Anonymous 4 (beautiful medieval chants!) still sounds nice post-delivery ;-).

Praise God for such a safe and quick delivery, and for a healthy little one!

There are many more pictures posted to my photo blog.